Kenneth Soward is a complete T4/T5 paraplegic and uses a manual wheelchair. He can transfer independently without the use of slide boards or a lifter and uses a static shower chair. He built his current residence in 2008 and it was the first home he lived in after moving out of his parents' house. Kenneth designed the floorplan from scratch, with the following overall objectives in mind:

The final floor plan is shown below and includes four bedrooms (the two rear bedrooms were built without a dividing wall creating a single large rumpus room) and three living areas, along with a garage with internal access. Most internal doors are 87cm wide. Termimesh termite treatment was used instead of spray termite treatments as this would allow paths and decking around the house to be built up to the same height as the top of the concrete footing.

The floorpan of the ensuite is shown below and is overall 3.3m by 2.0m. The entry door is a cavity sliding door, 92cm in width (all other internal doors in the house are 87cm in width). An extra-wide vanity includes 8 drawers for storage of supplies and has a semi-recessed basin for ease of access in the wheelchair. In hindsight, Kenneth would have opted for a wall-hung vanity suspended 30cm above the floor as the bracket holding the front small wheels on his wheelchair has slowly scribed a line along the bottom of the doors under the basin when he uses the basin. The height of the vanity was specified to the builder to be 80cm, which is lower than a typical vanity. 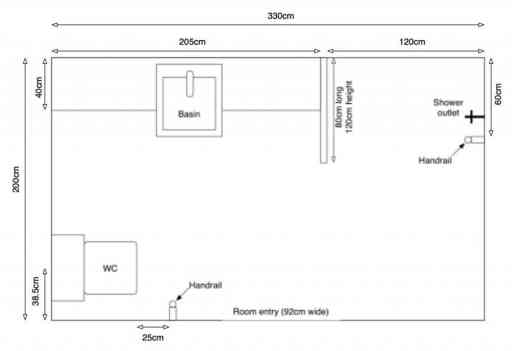 The centreline of the toilet at the left of the bathroom was specified to be 38.5cm from the left wall - this kind of detail would be especially important for people who use a mobile commode. Extra noggings were placed to the left of the ensuite entry door to allow for the installation of the vertical handrail which is visible in the reflection in the mirror. Similarly, extra noggings were placed on the right wall of the ensuite for the vertical handrail in the shower, as shown in the second photo. 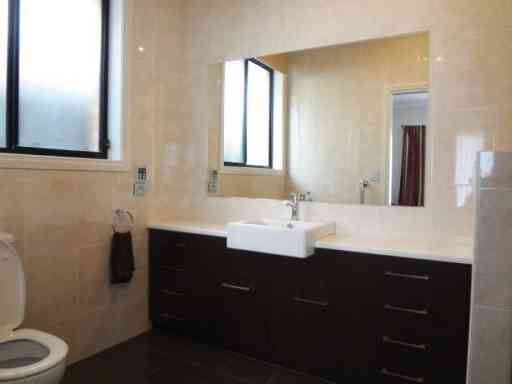 The floor of the bathroom was specified to be completely flat and the entire bathroom had fibreglass tanking waterproofing applied. During construction, prior to the ensuite being lined with blue board, Kenneth placed post-it notes around the ensuite instructing the plumber and tiler to contact him prior to beginning work to ensure that he could specify exactly where items such as towel rails and mixer taps were to be installed. The plumber had intended to install the shower mixer tap so far from the corner of the shower it wouldn’t have been able to be accessed while seated in the static shower chair.

The bathroom was tiled to the ceiling to ensure that any overspray from the shower would not get on painted walls. The bathroom was designed without any form of glass shower screen to avoid the need to squeegee the glass after each time the shower was used. The shower recess is 120cm square. 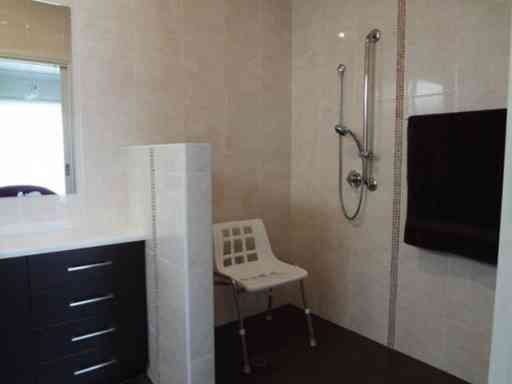 The master bedroom measures 3.8m by 4.0m and has a built-in robe instead of a walk-in robe for ease of access. The robe also has pull-down hanging rails manufactured by Hafele. 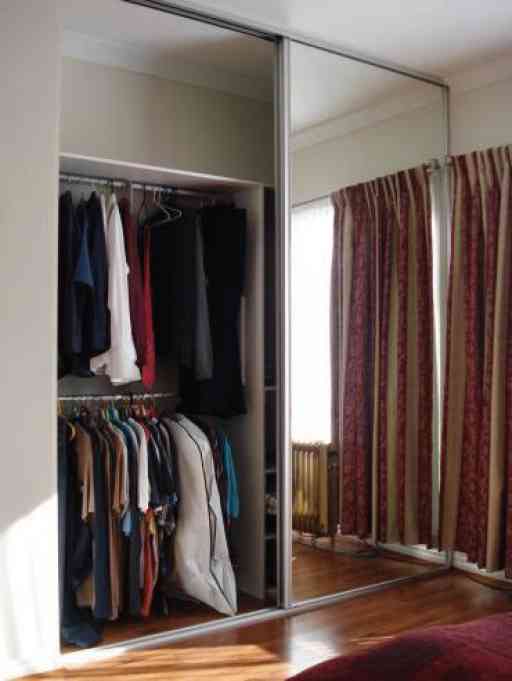 The kitchen is overall 4.0m by 3.3m. The benchtop that is up against the wall of the kitchen is the standard height as it needed to accommodate a dishwasher under the benchtop. Since the house was built, Fisher and Paykel have expanded their range of drawer-style dishwashers which means there are now more options and less restrictions when choosing benchtop heights. The island benchtop has a height of 82cm. Note that the kitchen benchtop at the right of the photo below is next to a recliner, allowing drinks to be placed on the benchtop from inside the kitchen and then directly accessed while seated on the recliner.

Underneath the cooktop, the doors and bottom shelf were manufactured so they could be removed to accommodate the wheelchair under the benchtop. The doors and shelf can be quickly and easily reinstalled when the house is sold. The same provisions were made under the kitchen sink however Kenneth has found he hasn’t needed to remove the doors and shelf. Kenneth often eats meals sitting at the kitchen benchtop instead of the dining table as the kitchen bench faces the television! Pot drawers have been used where possible for ease of access. The island canopy rangehood was installed low enough to allow the controls to be accessed from the wheelchair. The rangehood can easily be raised for future sale of the house. The use of a completely ßat electric cooktop with touch controls allows food to be prepared on top of the cooktop prior to cooking.

The oven is a self-cleaning pyrolytic oven (as cleaning an oven while in a wheelchair is problematic) and has been installed, along with the microwave oven, in a tower for ease of access. The microwave also functions as a grill, negating the need for a toaster. Pull-out boards under both ovens provide a handy shelf to place containers that are being transferred into, or out of, one of the ovens. 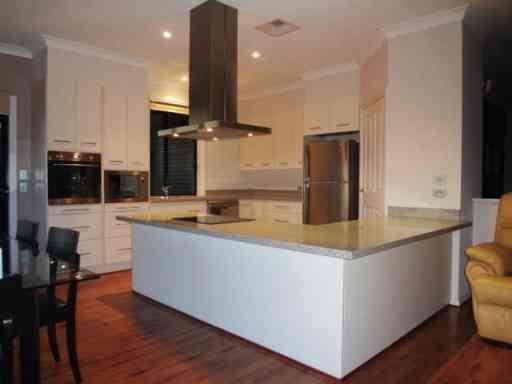 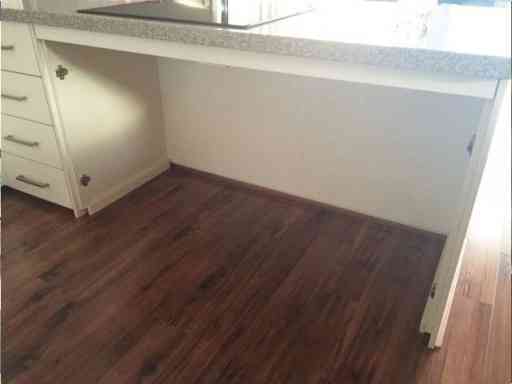 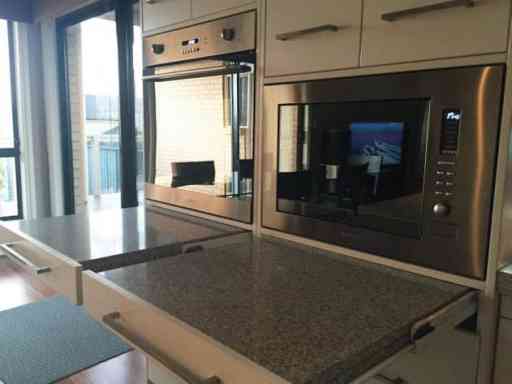 A deck was constructed around the kitchen/meals area and is the same height as the flooring inside the house. The sliding glass doors were recessed into the house concrete slab to ensure a completely flat transition between the inside and outside living areas. 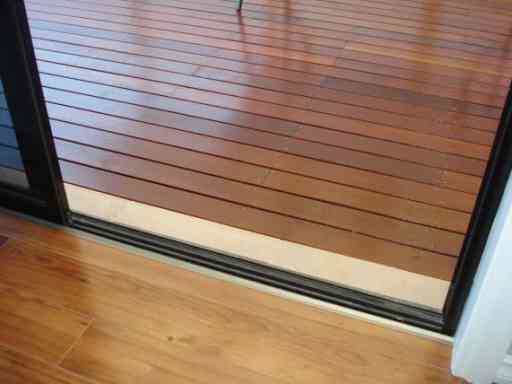 There is no wooden threshold under the front door and the tiled front porch has been built up to the same finished height as the floorboards inside the home. The entry door is 97cm wide. 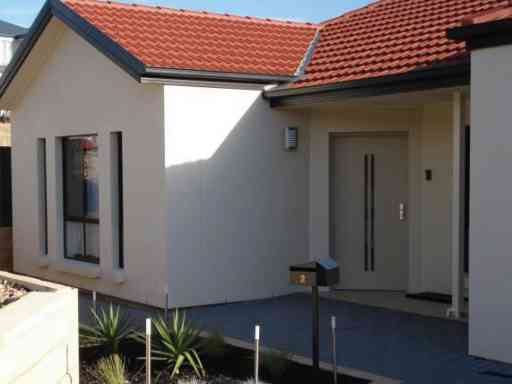